US forest industry performance in March and April was recently reported by both the US government and the Institute for Supply Management.

Total industrial production (IP) increased 1.4 percent in March (+1.0 percent YoY, but was still 3.4 percent below its pre-pandemic level of February 2020). The gain in March followed February’s drop of 2.6 percent, which largely resulted from widespread outages related to severe winter weather in the south central United States. For 1Q2021 as a whole, total IP rose 2.5 percent at an annual rate.

In light of stratospheric wood products prices, we are surprised that capacity utilization was “only” 78.1 percent in March; granted that is +2.3 percent MoM and +4.7 percent YoY on a gradually expanding manufacturing base (i.e., capacity), but it seems producers are passing up an opportunity to capitalize on an already stellar performance. If pressed for one or more explanations, potential candidates might include a shortage of truck drivers, high unemployment benefits that reduce the incentive to return to work, and reluctance by companies to raise wages and/or add employees they might have to let go if/when demand cools.

The Institute for Supply Management’s (ISM) monthly sentiment survey reflected a decrease in the proportion of US manufacturers reporting expansion in April. Despite the headline retreat, “manufacturing performed well for the 11th straight month, with demand, consumption and inputs registering strong growth compared to March,” observed ISM’s Timothy Fiore. “Labor-market difficulties at [respondent] companies and their suppliers persist. End-user lead times (for refilling customers’ inventories) are extending. This is due to very high demand and output restrictions, as supply chains continue to respond to strong demand amid COVID-19 impacts.”

Of the industries we track, only Ag & Forestry contracted. Respondents included the following: 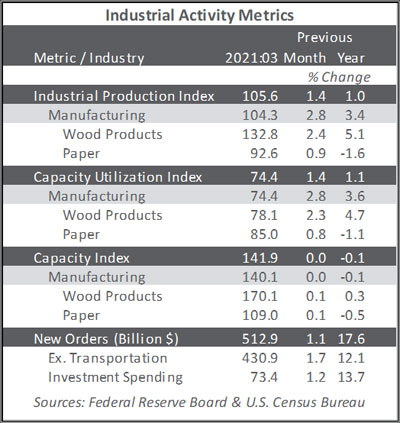 “Supply chain delays worsened, however, running at the highest yet recorded by the survey, choking production at many companies. Worst affected were consumer-facing firms, where a lack of inputs has caused production to fall below order book growth to a record extent in over the past two months as household spending leapt higher,” Williamson concluded.

The consumer price index (CPI) increased 0.6 percent in March (+2.6 percent YoY), the largest MoM rise since August 2012. Gasoline’s 9.1 percent jump accounted for nearly half of the increase in the all-items index. The natural gas index also rose, contributing to a 5.0 percent increase in the energy index over the month.