Since humans first clothed themselves, clothing has changed a lot, especially in the last 100 years. Today, considering the number of humans on the planet, it is more important than ever to consider the sustainability aspects of the fibres and processes used to make that clothing.

In Neanderthal times 400,000 years ago, animal hides were the main form of clothing. Owing to the low ratio of humans to animals, this was fairly sustainable; in fact, wearing animal hides as clothing used a residual material from the harvesting of animals for meat. Using plant-based material for textiles and clothing is much more recent (except perhaps for the anecdotal use of fig leaves in the Garden of Eden). The cultivation of cotton for cloth is about 7,000 years old. Mineral fibres for clothing are represented by polyester (made from petrochemicals), which was discovered in the late 1930s and first developed commercially as Terylene in 1941.

Meanwhile, three main technologies for turning fibres into textiles have been developed. Felting, which is similar to papermaking in that it is a laid-down mat of fibres, is about 8000 years old. Weaving was developed about 5000 years ago. And knitting has been around for about 1600 years. Most clothing today is woven or knitted from spun threads made from fibres. At the same time, as we improve our understanding of the chemistry and physics of fibres, new treatments have been developed to make fabrics water-resistant, moisture-absorbent, breathable, bulky or lightweight. This means that we depend less on the actual source of fibres and can engineer the desired fabric properties using chemistry and physics. 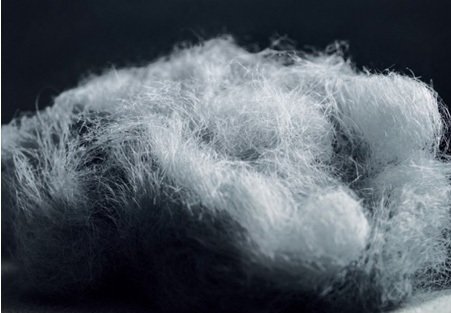 If we look at the production of fibres and fabrics from an environmental perspective, fibre sources and production methods have their pros and cons. Let’s look at some of the facts.

Animal – Animal fibres are mostly represented by wool from sheep, but there are several other animals whose wool is used as a fibre source for high-quality wool, including alpaca, mohair, angora, vicuña and cashmere. Admittedly these are available in lower volumes because they are high-value specialty fibres, owing mostly to their very low diameter, which leads to lighter, warmer clothing. Most wool-bearing animals are raised on non-arable lands and rough terrains, meaning they don’t compete for agricultural land, but they release significant amounts of methane gas. There is also concern that increasing flock sizes is causing overgrazing in Mongolia, India, and the Tibetan Plateau.

Mineral – Polyester is made from fossil fuels, and is thus a non-sustainable material, although its supply can be extended by using recycled plastics or by synthesizing polyester from bio-sourced plant materials in the future, but this is costly and energy-intensive. Polyester-based fleece fabric, first developed in the 1980s, is known for its lightness and warmth, but it sheds microplastics which can end up in the ocean and contribute to health problems not only for aquatic life but also for humans that eat seafood.

Vegetable – The cultivation of cotton uses a lot of water, agricultural land and pesticides. Wood fibres, which can be produced from sustainably harvested trees on non-agricultural land, have about one tenth the length of cotton fibres, which leads to a strength dilemma. This was solved in 1938 by the development of the viscose rayon process from wood-based cellulose, which created the industry of dissolving pulp production. The viscose process dissolves wood pulp in carbon disulfide (CS2) and re-forms new cellulose-based fibres with fibre dimensions resembling those of cotton. The solvent is foul-smelling, neurotoxic, and highly flammable, which has led to rayon production being mostly confined to countries that have lower health and safety standards. In the 1980s, a new process for wood-based fibres was developed, using a solvent called NMMO (N-methylmorpholine N-oxide), and this was commercialized as the Tencell process. NMMO is not as nasty as CS2, but can still cause skin and eye irritation.

But maybe there’s an even better alternative. Since 2009, scientists at VTT Technical Research Centre in Finland have been developing a more environmentally-friendly process for wood-based fabric from ordinary kraft pulp, not requiring any dissolution. The first step is to produce nanofibrillated cellulose, which reduces the diameter of the wood fibres and enables higher bonding strength due to the high surface area of the nanocellulose. Spinning technology with a specialized nozzle is fed with a suspension of nanofibrillar cellulose in water, and aligns and twists the nanofibres into a strong and stretchable yarn. The process has reached the pilot plant stage, and commercial production is expected by 2023. The technology was spun off (no pun intended) as Spinnova, which raised $135 MM in a 2021 IPO. Spinnova claims their filament has “the stretch and strength qualities of cotton and the insulation of lamb’s wool”. While the environmental credentials of this new material sound very promising when compared to those of the incumbent cotton, wool, polyester and rayon alternatives, there are still questions about the amount of energy required to produce the nanofibrils. This tree-based technology has taken root and is beginning to branch out into the fashion world!