Holmen Paper Hallstavik in Sweden is one example of having a wind power plant in the neighbourhood. Photo: Holmen.

How is electricity produced and distributed in Europe? Why do we have today's situation with high electricity prices and a lack of electricity? Why is Europe affected by the natural gas prices? What is causing the paper and pulp industry in Europe to be plagued by sky-high prices for electricity and other energy?

Fifty years ago, the electricity supply situation was completely different from today. At the time, we were not affected by a lack of Russian natural gas or EU regulations, but that was then. With the security supply goals, competitiveness and ecological sustainability, the EU countries jointly decided to create a common internal market for electricity and work began in the early 1990s.

The result was that Europe now has deregulated electricity markets and electricity is traded under free competition. The electricity grids are interconnected and the electricity can flow across national borders. The belief that Russian gas could peacefully and without problems supply many European countries with energy was probably in the back of the decision-makers’ minds, a belief which, with hindsight, has turned out to be somewhat blind-eyed.

The decision meant changes to natural monopolies for grid operation and the roles of other actors in the power system. In Sweden, Svenska kraftnät was created to manage and develop Sweden's transmission network. It includes 17,000 kilometres of lines for 400 kV and 220 kV with roughly 200 transformer and switching stations as well as 16 connections to other countries. Figure 1 shows the "cobweb" that the transmission network with its branches abroad constitutes. 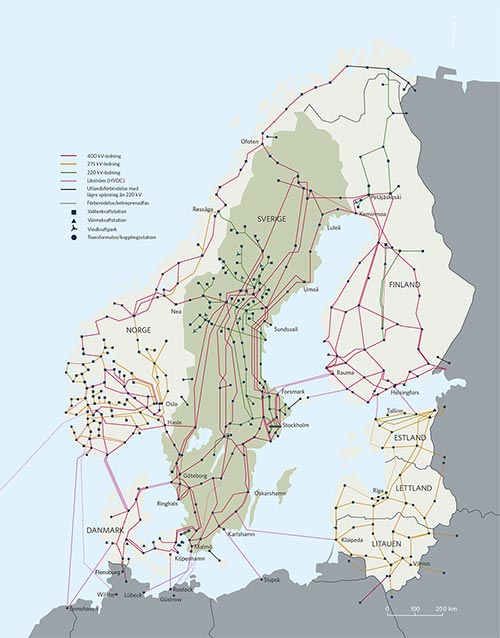 The transmission network for the flow of electricity with its branches abroad. Source: Svenska kraftnät.

The conditions for electricity production vary from country to country. For example, Sweden and Norway with their rivers that begin in the mountain chain have large hydropower resources, an opportunity that is not available in flat countries such as Belgium, Holland and Great Britain. Other countries, like Sweden in the past, have invested heavily in nuclear power for electricity production. Russian natural gas is nowadays used in many European countries to produce electricity.

Let’s take Sweden as one example, even if the situation is not typical for Europe. For many years, electricity production consisted predominantly of hydropower and nuclear power. In 1970, total electricity production was 59.1 TWh, having increased to 165.5 TWh in 2021. The mix of different types of production in 2021 was completely different from fifty-one years earlier. Hydropower is still the largest with a production in 2021 of 70.6 TWh to be followed by nuclear power 51 TWh, wind power 27.4 TWh, cogeneration 9.0 TWh, cogeneration in industry 6.5 TWh and 1.1 TWh solar power. Wind power is increasingly important and a couple of Swedish mills have wind mills nearby.

Sweden and Finland are large producers of chemical pulp and the Scandinavian pulp mills can thus produce a fairly large part of their electricity needs themselves. In most cases, the pulp mills are integrated with a paper or board mill that can benefit from the pulp mill's electricity production. Manufacturers of CTMP pulp or non-integrated paper mills, on the other hand, have a more difficult position, especially if they are in southern Sweden or Norway where electricity prices are higher than in the north.

The paper mills in Lessebo and Klippan in Sweden, as well as Nordic Paper's Norwegian mill in Greåker, are examples of mills that have been forced to close their production temporarily as a result of the sky-high electricity price. What the mills have in common is that they are located in southern Sweden and southern Norway, respectively, where electricity prices are the highest, as well as the fact that they are unintegrated. In the rest of Europe, there are also several examples of mills that have been forced to reduce production, or even close down, due to the skyrocketing prices of electricity and natural gas. 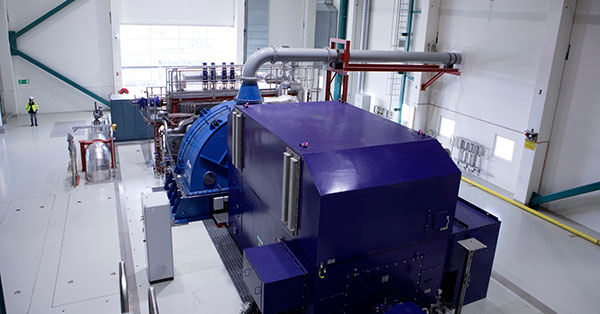 Chemical pulp mills have the advantage to produce electricity by own turbines. Photo: Södra.

UPM's business area UPM Energy, with its own power plants and shares in other energy companies, is Finland's second largest electricity producer with a capacity of 1.4 GW and the entire UPM Group has a capacity of 2.8 GW. For example, UPM is the majority shareholder in Pohjolan Voima, which in turn owns 58% in TVO, Teollisuuden Voima Oyj, which owns one of Finland's two nuclear power plants, the one in Olkiluoto. The plant already has two reactors and this autumn, after many ups and downs, will start up its third reactor, Olkiluoto 3.

On the continent, with a lot of recycled paper as raw material, companies are very dependent on natural gas, often used in gas turbines to produce electricity. The Nordic integrated mills are efficient by using residual products for internal electricity production. Turbines in kraft pulp mills are substantial producers of electricity. That possibility does not exist in the unintegrated European mills.

Given the shortage and high energy prices, producers of fresh pulp have an advantage. So far, the prices of both printing paper and cardboard have gone up, which has partly compensated for the high electricity prices. Companies have price hedged large parts of the electricity demand, but one can ask what happens long term?

Britain's paper industry, like the industry in other countries without their own large-scale pulp production, is severely affected by the high prices of electricity and other energy types. The historic mills at Stoneywood and Chartham, e.g., were placed into administration after the business became unsustainable in the face of spiralling costs for energy and raw materials.

Andrew Large, director general at the Confederation of Paper Industries (CPI), told the Printweek magazine that papermakers are worried. “There is astonishment and disbelief that the UK has been put into a position of waiting for actions for two months when EU competitor nations have been putting plans in place and implementing them,” he stated.

“It is a concern that the UK will lose out as a result – and no real confidence that there won’t be energy outages this winter, despite what politicians and officials may say. This winter, if energy supplies remain stable in the UK, it will be as a result of luck, not judgement.”

Mills seek to reduce dependence on natural gas and one example is personal hygiene papermaker Kimberly Clark announcing a £40m public-private investment with Carlton Power that will replace natural gas with hydrogen at its Barrow-in-Furness mill. Great efforts are also being made in the printing industry to partly reduce electricity consumption through energy-efficient technology. Manufacturers of LED-UV systems, for example, have noticed a strong increase in sales.

First the pandemic came, squeezing many pulp and paper manufacturers. When its grip loosened Putin's invasion of Ukraine came, which in weeks changed the rules of the game for energy and caused the prices of electricity and other forms of energy to shoot through the roof for many manufacturers.

In the whole of Europe, there is now a great deal of pressure on political decisions that can ease the situation, both for industry and consumers. The EU tries with various measures to ease the situation for both citizens and companies. Long term, subsidies here and there are not enough, but what is needed is significantly greater own production of electricity within the EU and surrounding countries so that the price situation becomes more normal. Ideally, it should also take place in a way that makes sense for the environment, which may not be so easy. 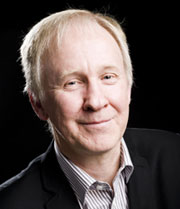 Sören Back has been working in the Swedish pulp and paper industry since 1976. With an M.Sc. in chemistry with focus on in pulp and paper technology the career spans from production control, product development, sales and marketing to communications, including PR, primarily in managerial positions. Over the years Sören has worked for MoDo Paper, M-real, now Metsä Board, and SP Processum but is now running his own business, SB Kommunikation AB, as freelance writer and communications consultant with customers mainly within the pulp and paper industry.